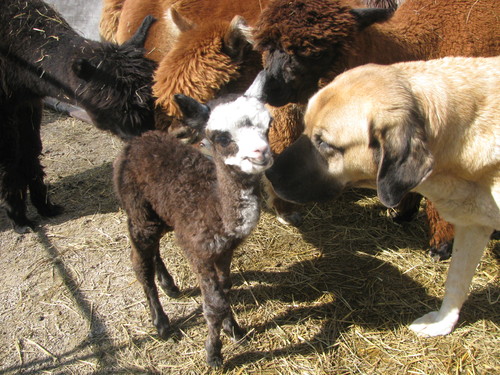 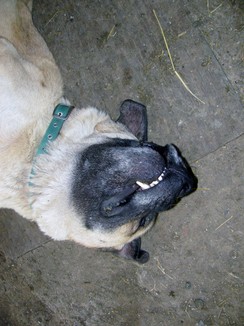 I have my two Anatolian Shepherds(no, they are not Mastiffs, although many folks think that's what they are) to thank for being able to sleep peacefully at night, knowing that they are guarding my herd of alpacas, and keeping them safe from the attack of coyotes and stray dogs. The brother of my female, Rika(an AKC Champion and Eukaneuba Championship competitor) was able to kill a coyote and badly injure another one, when his owner was being attacked in broad daylight while cleaning a pasture. My two have done their share and have dispatched the following critters that managed to get into the paca pasture: stray cat, skunk(without getting skunked themselves), raccoons, possums and even tried to catch a hawk that was after one of the farm's Guineas.

When I first thought about getting a protector for my alpacas, I had considered The Great Pyrenees because I had always admired them at AKC shows to which I went with my German Shepherds. However, I did not want to deal with all that hair, and I simply can't stand to see a dog with mats. So, when I learned about Anatolian Shepherds, that was my choice, and I drove all the way from Ohio to Florida to get my first one. While they are a bit of a learning curve for someone who has only dealt with herding dogs like the German Shepherd, it is amazing to me how smart these dogs are at sensing danger and reacting to it. I can bring anyone to the alpacas, and the dogs will be very friendly, but if I am not there, and anyone comes, they look like the most ferocious beasts, and since they are quite large as well, they are a definite deterrent and nobody but a fool would want to deal with them. gi

Like any dog, they do require training and anyone who thinks you can just throw the dog in with the herd and expect it to know what to do, is in for trouble. My best advice to anyone considering adding a livestock guardian, is to have the breeder give you information about training. Select a reliable breeder who has experience with working dogs, and who will stand by you in times of need.
Featured Items