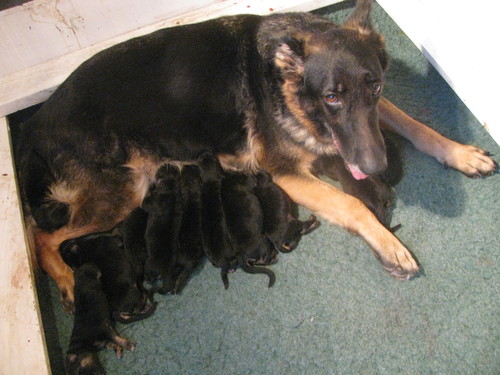 It was because I had bred German Shepherds for thirty or so years, that I felt that I would be able to raise Alpacas as well. I have had thirteen AKC Champions over the years, not counting my Champion Anatolian Shepherd, and just recently finished the Championship on a female that I also showed at the National, where she placed second in her class of 23. I co-own all of my dogs with my best friend and half the dogs live at her home, the other half at mine.

On November 29th, our female, JDM's Wildfire of Tanglewood, call name, Madonna, gave birth to her last litter, and she outdid her previous litters by two, birthing 13 puppies. Eleven survived and are growing by leaps and bounds. Most are already spoken for, and at least one is going to a show home. I kept one of the males out of her prior litter, and we will be showing him starting in 2015. He went to a puppy match a few weeks ago, and won best puppy, and we are sure that he will be one of our next champions, as was his grandsire, great grandsire and great great grandsire, the last two having earned the unique distinction of winning Grand Victor at the German Shepherd Dog Club of America.

Madonna is being retired from our breeding program and already has a great home waiting for her, where she will become a family's housedog and best buddy. We will still be able to see her since the new family is local. What most people like about our German Shepherds is that they all have the most awesome temperaments, making wonderful family companions besides being exceptionally beautiful.
Featured Items