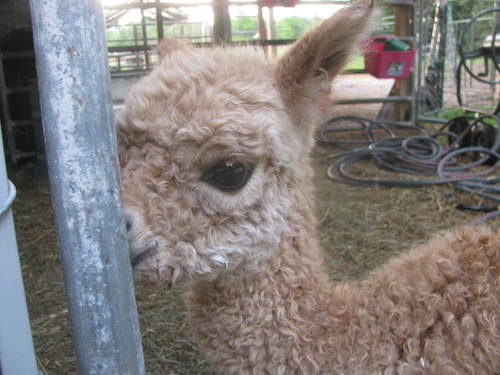 After 373 days of anxious waiting, we finally have a cria here, the first of 2015. As usual, I was checking Deerfield out every half hour or so, and was beginning to think that June 13th would pass as the rest of the 373 days had done, with lots of watching, but nothing productive to show for it.
Then, finally, at 4:00 pm, I noticed a bubble, the first sign of impending birth. I had put in a call to the vet clinic the day before because I was worried about the exceptionally long gestation, and when Dr. Patchell arrived, he could not detect a heartbeat, even with the ultrasound. So, I was prepared for the worst case scenario a dead cria or even a C-section for mom.

At first I only saw one toe and the nose, so, being proactive as I am, and fearing a problem birth, a call was made in to our wonderful vet clinic, who always has a vet on call . Dr. Liming told me he would be there in 45 minutes, and as usual, he was right on time, turning into the driveway at 4:45 pm, just seconds after I had successfully pulled the cria out. Much to my joy, it was a girl,a light fawn, and apparently healthy and with a nice weight. She got her BoSe shot, and a good physical, and soon was up and trying to nurse. I watched her for some time after Dr. Liming left, to make sure she got colostrum, and apparently she did.

The next day, however, I noticed she had lost more than the normal amount of weight, and had gone from the 14.6 at birth, to 12.6.
Another call in to the vet, and it was decided that I needed to do some warm compresses on mom to get the udder from its hard state, to one that was better for the cria . After several compresses(mom seemed to know I was trying to help, and did not kick as she usually did), I was able to milk out about nine ounces of milk into a glass measuring cup. I then put the milk into a small syringe, and got baby to drink all of it. That seemed to do the trick, and she has been gaining weight steadily, and I can see her nurse quite often, with much more success.
Whew, I hope the next two crias don't pose so much anxiety for me, but that is what you can expect sometimes when you raise livestock. Today, the little one was pronking all over the pasture, getting even some of the older girls in on the act. She has also added a couple of pounds, so that is a good sign. That is what makes raising alpacas so much fun.