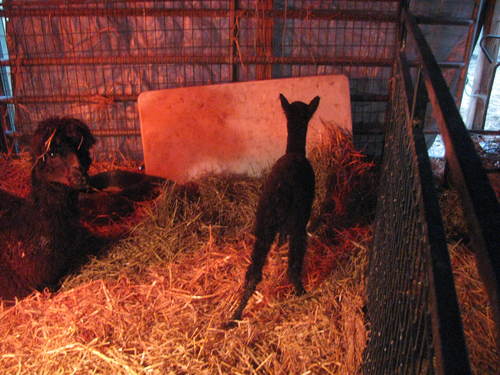 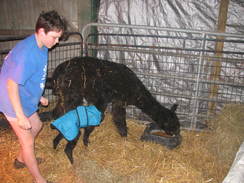 On the 21st of this month we had a huge surprise in our barn, a totally black little cria male, already up and running around. As I had only bred one female last year, I was not expecting this one, so will have to do some real background searching via DNA to find out who daddy is He has gained weight each day and has made his way into the herd, leaping around and causing general havoc. Mom, also a true black, and Evander daughter, has plenty of milk and is super protective of her little guy. My grand nephew has named him Lamborghini, as he loves nice cars and spotted one of those a few days before the cria was born. Of course, he had to make his appearance on one of those days when it went from 60 degrees to below freezing, so he was coated after we dried him off and sprayed his umbilical cord. He is now almost two months old, and feisty as they come. His fiber is stunning, with lovely, tight curls all over his body and a shiny black.